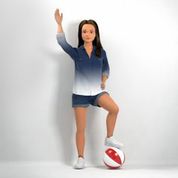 Some of you may have seen the widespread coverage of Pittsburgh artist Nickolay Lamm‘s digital rendering of a real-size Barbie. Lamm checked the CDC’s Web site to get the measurements of the average 19-year-old woman, then used those as the basis for his creation.

Well, response has been so positive that yesterday Lamm, 25, launched a crowd-funding campaign to help him start manufacturing his doll. He’s dubbed her “Lammily,” and the tag-line of his campaign is “Average is Beautiful.” Instead of blonde, she’s brunette. She wears minimal make up and dresses in sporty shorts, workout clothes and one belted dress.

So far Lamm is off to a good start. On the second day of his fundraising campaign he’s already comfortably exceeded his goal of $95,000 To make sure he gets his first foray into doll making right, Lamm is in touch with former Mattel Vice President for Manufacturing Robert Rambeau, who’s helping him identify reputable manufacturers.

“Barbie has been critiqued a lot,” Lamm notes. “My thought was rather than critique her, why not make a proof-of-concept to show that a real-life doll would appeal to people? Normal Barbie doesn’t exist and likely never will. Lammily is my attempt to make what I feel should exist.”

“Every single one of us has something they’d want to change about their body,” says Lamm. “For example, I’m only five-five. I’d rather be six feet but I’m perfectly happy the way I am…I feel like every one of us has gone through something like that.”

While others have tried to market real-sized dolls, no one has yet succeeded. Lamm suspects it’s because “they made a big deal about this doll being average.” He explains, “That appeals to parents, but girls don’t care abou that. They just want a fun doll to play with.”

A sense of humor would probably help sell Lammily, too, and Lamm seems to have one. He imagines a future add campaign in which Lammily is doing pushups and other “fashion dolls” are breaking apart because their emaciated bodies aren’t made to demonstrate physical fitness and health.

To those that have requested that Lamm do for Ken what he’s doing for Barbie, he says that (the rise in male-eating disorders notwithstanding) he’d like to concentrate on Barbie because he believes far more girls than boys and women than men suffer from body image problems. What do you all think?

My story, I remember believing not so long ago, was bound to end in tragedy. Another life lost to the death grip of anorexia. Another fatal statistic. Another hopeless cause. Initially my battle with eating [...]

Body Mass Index (BMI) is a number calculated from your weight and height which makes it an inexpensive and easy screening for weights that may lead to health problems. Go to the National Institutes of [...]

In 2010 a French model and actress Isabelle Caro died as a result of anorexia. At one point she had weighed only 55 pounds. Concern over her death led the way to a proposed French law that would impose [...]